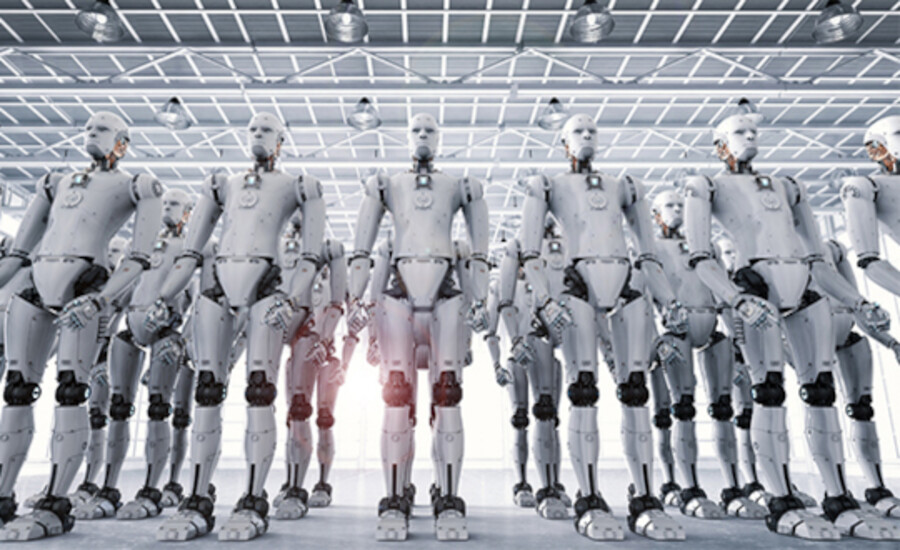 Will Robots Destroy the World?

Artificial intelligence and the end of mankind

Is man designing his way to destruction and programming his way to the apocalypse? Artificial intelligence (AI) was once synonymous with dystopian science-fiction novels and films. But now it is a growing fear in the nonfiction world. Intellectuals and world leaders fear that technological advancement will enable the uncontrolled rise of the robot.

The tech boom of the last century, particularly in the realm of modern warfare, is cause for concern. With the technology that human beings have developed, man could wipe himself out a thousand times over.

But does a world of cyborgs and artificial overlords gel with the future predicted in your Bible? After all, this is a subject that deals with questions of the human mind and whether humans have a soul, so it is logical to consult the Bible.

Many prophecies speak about a world of unparalleled advancements matched by unparalleled evils. It also speaks of the enslavement of nations, nuclear war, disease and death—all in our lifetime! Shocking? Yes. True? Absolutely.

But is AI destined to be the hand that fulfills those Bible prophecies?

Artificial intelligence surpassing and enslaving man is no crackpot theory. Prominent figures in society promote it.

Take Elon Musk. The founder of SpaceX and Tesla is well known for warning of the threat AI poses to mankind. On September 4, Musk tweeted, “Competition for AI superiority at national level most likely cause of WW3 [in my opinion].”

He doesn’t mince words. Musk once compared AI development to “summoning the demon.”

Before a gathering of United States governors in July, Musk warned, “I keep sounding the alarm bell, but until people see robots going down the street killing people, they don’t know how to react, because it seems so ethereal.”

But he is wrong. There is a difference—a vast difference.

What Robots Can Never Have

There is something lacking in AI that cannot be created by men. It is something we possess that most of the world doesn’t even understand.

All these scientists believe the human mind is solely physical. If that is the case, then why couldn’t a scientist create an artificial copy—an intelligence that could rival or even exceed man’s own? Many scientists disagree with this reasoning. But there is a more fundamental reason that these scientists will never create a human-type intellect. Notice what Herbert W. Armstrong explained in his booklet What Science Can’t Discover About the Human Mind (free upon request):

In Job 32:8, we read, “[T]here is a spirit in man: and the inspiration of the Almighty giveth them understanding.”

This is a great truth, understood by but very few.

The brute animal has a brain virtually identical to human brain—and some even larger. But their brains cannot know—comprehend—what man knows. Neither could man without the spirit of man which is in him. In other words, this spirit imparts the power of intellect to the human brain.

Artificial intelligence will never have this human spirit. A robot can only calculate or do what it is preprogrammed to do. Robots do not think and reason. They do not have emotion or passion. Machines, like animals, do not have this power at their disposal—and never will! As such, robots can never surpass mankind’s abilities.

So do we have nothing to fear from modern technology? Certainly we do—but the intelligence behind it will be human.

Throughout history, man has set his mind to devise and use means of destruction. After 6,000 years, we now have the ability to wipe ourselves from the face of the planet!

History alone should warn us that this technology will be used. And the Bible also gives very specific warnings. Notice prophecies in Ezekiel 6:6 and Hosea 5:9. Entire cities laid waste; some without a single survivor! (Isaiah 6:11; Jeremiah 2:15; 33:10). Such unparalleled destruction is impossible without the technological advancements of the past century. This is, in part, how we know these prophecies are for our time today.

Notice Habakkuk 3:17: “Although the fig tree shall not blossom, neither shall fruit be in the vines; the labour of the olive shall fail, and the fields shall yield no meat; the flock shall be cut off from the fold, and there shall be no herd in the stalls.” Again, this kind of destruction wasn’t possible 100 years ago.

Jesus Christ prophesied that this time of suffering would be the worst in the history of mankind (Matthew 24:21). Never before have we had the means to inflict such suffering.

At the end of World War ii, Mr. Armstrong said on his radio program, The World Tomorrow, that human survival itself was now threatened:

Before the end of the war in Europe we heard a lot of talk about this being the last war. … We might as well face the stark, ugly, horrifying truth, my friends: The world leaders know within themselves that there is no hope, so far as human effort and international agreement or organization is concerned, of preventing another war—and all know now that even this greatest of all wars will have been but child’s play by comparison. We have engines of destruction now which can annihilate humanity from this Earth—stamp out all human life! Too horrible to contemplate? Well, we must contemplate it! We must face it, for we are the generation destined to live into and through it!

For more on this terrible time of suffering, be sure to read Trumpet editor in chief Gerald Flurry’s February 2014 Trumpet article titled “The Unthinkable Will Happen! ” The volume of scriptures that describe a nuclear holocaust will astound you!

But this still doesn’t answer the question—will it be AI that ushers in such terrible calamity?

The Staff of the Assyrian

We have already read the biblical account of the coming nuclear war in specific detail. Remember, this was recorded thousands of years ago! And just as remarkably, the Bible records the nations that will do these terrifying acts. Among others is Assyria.

Notice Isaiah 10:5-6: “O Assyrian, the rod of mine anger, and the staff in their hand is mine indignation. I will send him against an hypocritical nation, and against the people of my wrath will I give him a charge, to take the spoil, and to take the prey, and to tread them down like the mire of the streets.”

The biblical Assyrians migrated north and west from Mesopotamia. Their descendants today dwell in the modern nation of Germany.

Notice here that God says He will use Germany (and a German-led Europe) to punish Israel and Judah. The modern descendants of these nations make up the United States, the British Commonwealth and the Jewish state of Israel. You can read more on how to identify these nations in our free book The United States and Britain in Prophecy and our article “The Remarkable Identity of the German People .”

Notice, God does not use AI to punish His people. But it does appear that the German-led Europe will use technology when it attacks the West. Ezekiel 7:14 states, “They have blown the trumpet, even to make all ready; but none goeth to the battle: for my wrath is upon all the multitude thereof.” Notice what Mr. Flurry wrote in the May 2005 Trumpet:

The trumpet of war is to be blown in Israel—mainly America and Britain. (If you would like more information, request our free booklet on Ezekiel . All of our literature is free.) It seems everybody is expecting our people to go into battle, but the greatest tragedy imaginable occurs! Nobody goes to battle—even though the trumpet is blown! Will it be because of computer terrorism?

Again, this is a clear sign that technology will be exploited in this soon-coming conflict!

What about captivity and enslavement? Many think AI will try to dominate mankind or capture us in a Matrix-like system of control.

Again, the Bible does say that nationwide enslavement will be an aspect of the coming Great Tribulation. But AI will not be taking captives.

Read Jeremiah 30:3. Combine it with Hosea 9:3-6. Clearly, the nations of Israel will be enslaved in Assyria and Egypt! Joel 3:1-3 show how the lands will be divided and children bartered as a currency. What a truly awful world.

Thankfully, God provides a means of escape for those who are willing to listen and obey (Daniel 12:1; Revelation 12:14). Will that include you?

We have proved that while technology will be used in conflicts of the near future, it will not be AI that wields it. Men will attack men. Men will enslave men.

Taking Over the World

Thankfully, such terrible times will be short-lived. God will mercifully send His Son Jesus Christ to intervene, lest there should be “no flesh saved [alive]” (Mathew 24:22).

The Kingdom of God will be established immediately and will expand forever (Daniel 2). Notice, there will be no AI civilization ruling in the meantime.

Man will have a chance to get to know his Creator. The nuclear-ravaged world will be healed and a loving government established forever! Think of the technological advances that will come. Weapons and their development will be a thing of the past! Read about it in our free booklet The Wonderful World Tomorrow—What It Will Be Like .

Russian President Vladimir Putin recently said, “Artificial Intelligence is the future, not only for Russia, but for all humankind. … Whoever becomes the leader in this sphere will become ruler of the world.”

But in the meantime, hardhearted mankind must go into the Great Tribulation. The worst chapter of man’s history will begin. Thankfully, our merciful God will cut it short, but not before nuclear war wipes out large portions of Earth’s inhabitants.

Those who know the truth can take hope in this future. As bleak as the Tribulation will be, it will precede an eternity of joy and peace. Every man, woman and child who has ever lived will have a chance to grow under God’s system of government. Finally, the world will be ruled justly. It won’t be by the tyrannical devil or corrupt mankind, nor some cold, calculating machine—Jesus Christ will rule, and the world will flourish. ▪