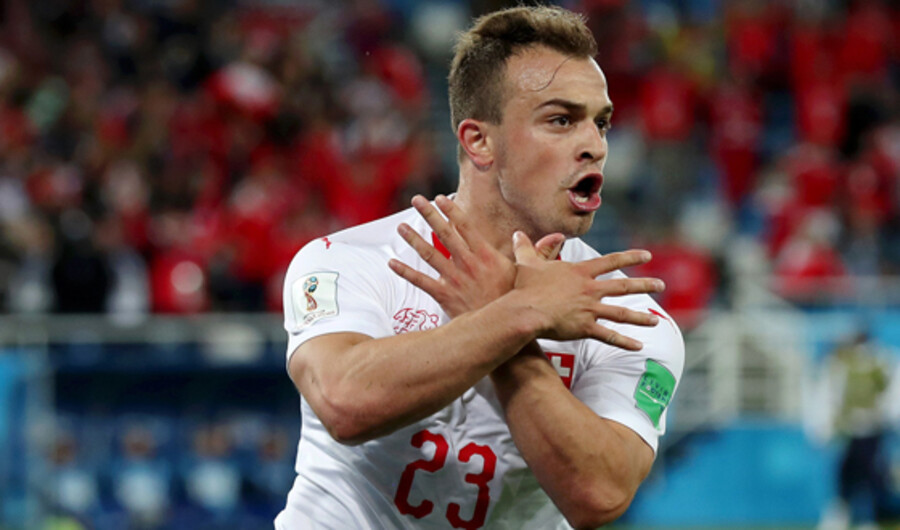 A Lesson in International Relations From the World Cup

"Is the World Cup for Nationalists or Citizens of the World?” asked Kanishk Tharoor in the  New York Times  earlier this month . It’s a pertinent question, especially in 2018. “Nationalism versus globalism,” wrote author and economist Anatole Kaletsky  last week , “appears to be this decade’s defining political conflict.”

As a Trumpet writer, it has been my duty over the past two weeks to research this “defining political conflict” by watching a sufficient amount of World Cup football. It’s a laborious job, but it must be done.

Let’s begin with Xherdan Shaqiri, the multilingual, Muslim professional football player who in 1992 emigrated from Yugoslavia to Switzerland and has since lived in Germany, Italy and the United Kingdom. Shaqiri plays for Switzerland and in the final minute of Friday’s match against Serbia made a magnificent straight-line dash down the middle of the pitch to secure the winning goal.

Shaqiri’s life and career, like so many World Cup footballers, embodies the globalists’ vision. These guys travel the world playing football, living lives seemingly unconstrained by borders, politics or ideology. These men, it appears, are quintessential global citizens.

Then there’s the World Cup tournament itself, considered by many to be a testament to the virtues of globalism. “The World Cup is a festival of globalization,” writes Franklin Foer, author of the 2004 book How Soccer Explains the World. In Russia right now, hundreds of thousands of fans from countries all over the planet seem to have set aside their differences and are bonding merrily over the game of football. “This is exactly the way that globalization was supposed to function in the eyes of its champions,” writes Foer.

The World Cup shows us that “in both soccer and life, you can be a proud representative of your home country while being incurably global,” wrote Tharoor (emphasis added throughout).

Does the World Cup prove the merits of globalization and advance the cause of globalists like Barack Obama ?

When Shaqiri scored against Serbia last Friday, the midfielder celebrated by gesturing the form of a double-headed eagle, a nationalist symbol of Albanian independence. Serbia has not forgiven Kosovo for declaring independence in 2008. Serbia still refuses to recognize Kosovo as a sovereign state. Shaqiri’s outburst infuriated Serbian fans and sparked a political controversy that resulted in a fifa investigation and a fine on Shaqiri of 10,000 Swiss francs (us$10,023) for “provoking the general public.”

There have been other nationalist outbursts too. In fact, over the past two weeks the football associations of Poland, Mexico, Argentina, Serbia and Croatia have all had disciplinary hearings opened against them for discriminatory or insulting behavior. The Polish Football Association was fined this week for an offensive sign flaunted by Polish fans during its match against Senegal. (fifa didn’t identify the specific placard, but it was believed to be a large poster displaying the Mieczyk Chrobrego symbol, used by Polish far-right and nationalist groups.)

Today, nine people were arrested during the Brazil-Serbia match after a violent brawl between fans in Spartak Stadium in Moscow.

Here’s the point: While globe-trotting footballers like Shaqiri and the World Cup tournament itself seem to promote the merits of globalism—and many players, fans and institutions endeavor to be tolerant, respectful, impartial, fair and equal—plenty of nationalist sentiment exists, both on the pitch and off.

The central question is: How intrinsic is nationalist sentiment to human behavior?

Once again, let’s turn to Shaqiri. Notice how he explained last Friday’s nationalist outburst: “In football you have emotions. You can see what I did. It was just emotion.”

That statement, in many respects, describes the human condition. While humans can (and should) aim to cultivate higher values, in the heat of the moment, as Shaqiri admitted—when a person is under pressure, facing a threat, or overly emotional—the natural, uncontrollable impulse is to protect and promote the self. Exhilarated by the fact that he had scored, Shaqiri couldn’t refrain from celebrating with a selfish gesture, one that promoted his cause and diminished that of Serbia.

On display daily at the World Cup right now is a basic yet widely rejected truth: the love of one self trumps the love of others. That is the very nature of human interaction. It is the nature of humans that the urge to get trumps the urge to give. Every human has emotions, and the human experience is laden with pressure, stress, discomfort and threats. When a human experiences one of these, the natural response is to protect and promote the self, even if it disadvantages others.

Notice this simple, yet profound, explanation of this topic by Herbert W. Armstrong: “This very human nature—vanity, self-love, self-exaltation—implants within the self the basic spirit of rivalry—the ‘party spirit.’ That is why students of one college are loyal to their team in sports, but against their team’s opponents. It is natural—according to nature—that people are loyal to their political party, opposed to the opposing party—patriotic toward their country, willing to fight against and kill people of another country in war. Their sports team, their political party, their country, all these are part of their own’ empirical self” (Plain Truth,August 1962).

The urge to create a cohesive community of global citizens, a world without borders, in which all humans respect one another as equals, is in many ways a noble aspiration. But it is a futile aspiration. Why? Because, as Mr. Armstrong explained so well, humans are fueled by “vanity, self-love, self-exaltation.”

As splendid as they are, virtues such as respect, tolerance, impartiality and equality, are not intrinsic to the human heart or mind. “The heart is deceitful above all things, and desperately wicked,” wrote the Prophet Jeremiah. This is not to say selfishness cannot be mitigated, that prejudice and intolerance cannot be alleviated. It often is, by technology, materialism, regulation and policing. But the reality created by the moderation of selfishness is superficial. Put under pressure or faced with a threat, an individual or community of individuals will naturally and inevitably seek to protect and promote the self.

Does this mean humanity is doomed to failure forever? Absolutely not. Man’s problems, as Mr. Armstrong explained, are spiritual in nature. As long as human nature exists, man cannot experience peace, unity and happiness, neither individually nor collectively. Thankfully, human nature can and will be eradicated. How? By the power of God’s Holy Spirit.

The subject of human nature is one of the most important and enlightening you could study. If you want to learn more about yourself, why you think the way you do, why you make the decisions you make, why you behave the way you behave, start by studying the truth about human nature. ▪